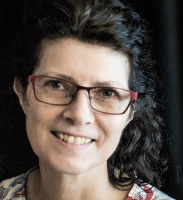 Originally from France, Caroline Legouix has been living in Quebec for about twenty years. She studied English Language and Civilization, then Psychology and Academic and Career Advising. After having worked in different fields, such as advisor in career management at École Polytechnique de Montréal, she now dedicates herself to writing. She has published a collection of short stories and a novel. Some of her short stories have been published in magazines as well as in a textbook for teaching French as a second language. She shares her interest in the French language and for writing by hosting writing workshops. She speaks English, regrets having forgotten German and Romanian (which she studied at school and university), and has some knowledge of Spanish, Japanese, and Serbian. She would like her books to be translated into English and Esperanto.